So today we had stuff from the sky … well from the tree at the Capitol. Just before the 5:30AM group gathered a couple of us were standing out at the corner of the 10th and N street, when we heard some rustling in the trees. Then a loud thump that hit the grass area about 20 yards from us. At first we thought we just witnessed a raccoon plummeting to it’s death. So we quickly went to check it out. Luckily it wasn’t a raccoon, it was however something from the tree, it was a giant nut from the tree.

Then came along the running groups and hitting those miles in hard! A three mile out and back then off to Old Sacramento with the 6AM group to pick up McRunner at the Tower Bridge.

We got back to the West Steps to take our photo … 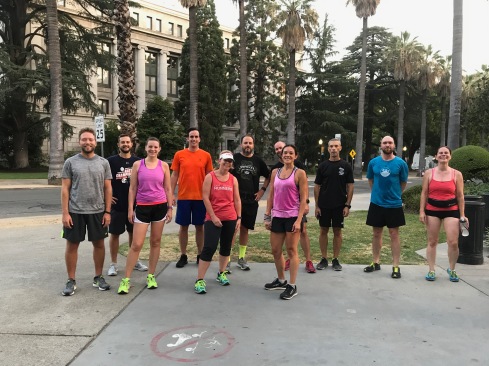 Then it was off to Destination Friday for the 6:25AM group where we headed out to the Golden 1 Center. Today’s workout was selected by Kristin who celebrated her birthday with us for a workout.

Before getting to the Golden 1 Center, if we thought the nut falling from the tree couldn’t get beat, we saw a bat moving along the sidewalk like it had a rough nite in the caves. It was literally crawling on the sidewalk.

Once we got to the Golden 1 Center it was about the ping-pong ball workout followed by some stairs between each bounce.

During the workout we came in with our second run in with another bat. This one was sleeping upside down on one of the steps. Yes we had passed it about 6-7 time before Brad noticed it.

After the final steps were climbed and ping-pong balls were bounced. We headed back to the West Steps to end the workout where most of us park our cars or lock our bikes.

Great job everyone! Solid week and have an awesome weekend!

In closing we want to give a Birth-YAY shoutout to Kristin!

3 thoughts on “Bats and nuts from the sky”