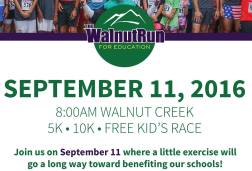 It’s time for a 9RUN6 field trip! Here is one that we are promoting to help one of our out of town 9RUN6 members in Walnut Creek. Meet Eric Miller, who competed for 9RUN6 at the National Beer Mile here in Sacramento. He also rocks the 9RUN6 gear pretty frequently. Check out the photos below … 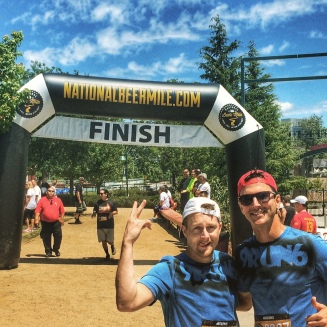 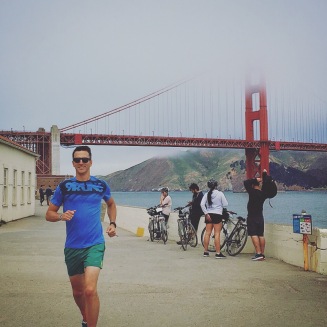 At the Walnut Creek Run for Education, participants can expect a well-organized family fun event that offers a flat and fast 5K/10K racecourse. There are tons of AGE awards, as well as the coveted FASTEST 15 shirts, awarded to the first 15 male and first 15 female in both the 5K/10K courses. For participants who want to enjoy a more casual Sunday, the event offers the 5K walk, which allows strollers, and dogs on short leashes. There is also a free kids run for those under 7yrs old. Miller says they refer to these young runners as, “our Future Marathoners.”

The Walnut Run was originally known as The Walnut Festival Run because it preceded the annual Walnut Festival, held every September in Walnut Creek, CA. The event went dormant for 10 years, due to not having anyone to put on the event. That was until a local resident, Jason Cooke, who decided to bring back the event in 2010, with financial support from the Festival Association. Jason asked Miler to partner with him in 2011 to help in the race production. From 2010-2013, The Walnut Festival Run raised nearly $35,000 to donate back to the local schools of Walnut Creek.

In 2014, the event lost the backing from the Festival, so Miller formed Monumental Racing LLC, a race production and fundraiser-consulting firm, which now produces the race with the new name The Walnut Run. The net proceeds from the event are donated to local schools by a level of participation. The more participants and affiliates from a school or education foundation, the more of the net proceeds will be donated to that individual school.

When asked if 9RUN6 members could save some bucks since we are traveling to the event, Miller said, “Yes, I have created a discount code 9RUN6 that offers 10% off registration.”

Eric was posed the question “you have been around some of the 9run6 folks as you raced at the Beer Mile under the 9RUN6 team and you even rocked the shirt during the event, what are your impressions of 9RUN6?” He responded with, “I’m all about building community. 9RUN6 has shown to share this same passion. The runners I’ve met have been great. They, too, believe in bringing people together to share a love for community and fitness. I’m a Sacramento native who moved to the Bay Area over 10 years ago, and I love how 9RUN6 has welcomed me into their crew with open arms.”

Miller feels that people in Sacramento will really enjoy The Walnut Run for what the race has to offer, and it’d be a fun road trip for the family and race crew. Many times we focus on convenience. He understands distance can be an inconvenience, but that is only if you choose to look at it that way.  The Walnut Run will offer you family fun event that truly brings a community together for a good cause.

So here are the details …

Where: 1231 S. Main Street in front of the Giants Dugout Store.

If you are going to join us, please leave a comment below so we know who is in and we can organize a carpool for the field trip down there.