I made my way to the Phoenix International Airport. I was flying red eye and was not thrilled about it. Ethan met me in Phoenix and we flew Phily to Boston together. Having him around always makes things better.

We arrive to Boston around 10:00 a.m. Running on just a few hours of sleep, we were ready to tackle our busy day.

First, we check-in. We stayed in a cute little Airbnb apartment at the North End of Boston (AKA little Italy). Got a quick run in and we were ready to explore! We grabbed a much need lunch, following with a cannoli from Maria’s. We walked around a more, relaxed by the waterfront, and then were then off to our duck tour.

The duck tour was a ton of fun. We explored Boston and had the best tour guide! There were a few kids quacking their little quackers that they got before starting the tour… Lets just say that was great birth control. Cute kids though.

After the duck tour, looking like a hot mess… we went out for dinner– Italian food, Prezza was the name. My one ravioli was good… I’ll leave it at that.

Feeling well rested, Ethan and I started our morning with a nice and easy shake out run. Came back to the apartment and we were out the door for some break

fast. We went to a cute, Italian, family owned breakfast spot called Theo’s Cozy Corner. This place lived up to its name. It was cozy and in a corner. The food was delicious and the atmosphere was great.

From there we were off to John Haynes Veterans Memorial Center for package pick-up/expo. The lines were long but moved quickly (thank goodness).

It was getting real! Once I received my bib and goodie bag (by the way, a big thank you to all the volunteers who helped at this event!!! You are all incredible!) I was ready to take on the big ass expo.

The first thing that I made sure I did was to buy a finisher jacket, duh! Ethan also let me pick out a few goodies for my birthday. My gosh, I love that man! I then wanted to hit up the Zensah booth because I mean… who wouldn’t? I was able to chat it up with Alberto and cop myself a new pair of compression socks.

We then made our rounds. I bought a few more things, got some Nuun, then realized that we did not want to walk anymore so we called it quits. It was fun but I was not about the walking.

After that, I wanted to check out heartbreak hill and go to Harvard so that’s what we did. We got a lyft and were head to our next destination(s). We had the best lyft driver by the way. He took us along the course for Monday. Once we got to heartbreak hill and I was in one of those, “I can’t even” moments. I did not want to look at it anymore so we took off to Harvard. We explored the beautiful campus and were ready for lunch. We didn’t want to walk a ton considering I was going to be running 26.2 in less than 24 hours.

We end up at a cute spot called, Grafton Street Pub & Grill in Cambridge, MA. Yummy food to say the least!

Making our way back to Boylston, we decided to check out Runbase, Janji pop-up, and Tracksmith! I was able to pick up my Tracksmith BQ singlet and another expensive shirt (so worth it).

Once I realized I was broke, we then headed to the finish to snap a few photos before getting a lyft back to the apartment to relax before Ethan and I headed out for our date night!

We had Italian, again! We love our pasta (Run all the miles, eat all the carbs)! We went to Ristorante Saraceno, a very cute restaurant with delicious food. Once dinner was over we headed to Mike’s Pastry for some AMAZING cannoli’s. I mean these cannolis are AMAZING! We took a few back to the apartment and grubbed before getting ready for bed. (Not sure if you notice, but I talk about food a lot!)

I obviously prepared the night before race day and got the flat runner going.

I woke up so nervous but SO EXCITED. We were up early to eat and head to Boston Common for the bus pick up. Ethan and I hung out for a bit before he sent me off…

It was time to load the bus and take off to the start, Hopkins, MA. There were so many enthusiastic and positive runners on the bus. Some were running their 5th Boston Marathon and some were running their first; it was great to hear their stories. I was having all the feels, filled with emotion, and just wanted to get to athlete’s village! 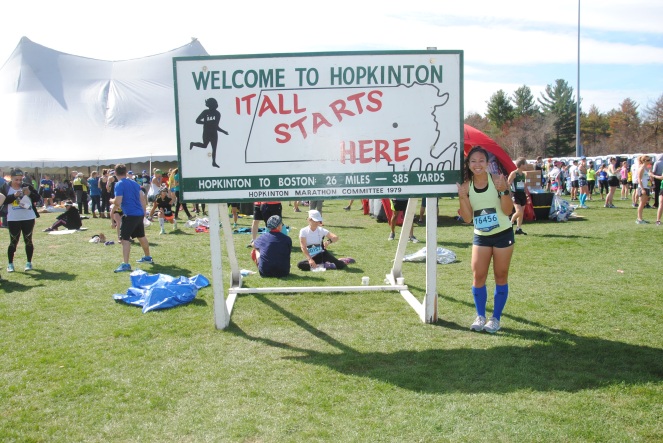 Finally, we arrived, 45 minutes later (meanwhile I was thinking, “Dang, this is far! LOL”) Back on track… there were so many runners; it was overwhelming but so amazing. It is 10:05 a.m. and it’s time to walk to the start. I met a few people on the way who were so nice and from Cali- they qualified at CIM! Talking to them put me at ease. Snapping photos along the way, I knew I was ready.

I find my corral and was just so giddy. I had a feeling that I have never felt before. A feeling that I just cannot explain. I had a ton of thoughts running through my head at this point, I wanted so badly to qualify for Boston again. That is what I trained for! But then I remembered the most important thing… I wanted to enjoy the experience and not think about my result because I mean, you can only experience your first Boston ONCE. Also, the running conditions were not ideal (about 70 degrees when I stated at 10:50 a.m.) though it is not an excuse!

*Boom* The gun fires and the runners are off. I wanted to make sure that I did not start out too fast, nice and steady was the goal, and I did just that. All of the spectators on the course were so amazing… They were loud and so encouraging. I felt like a celebrity!

The race was going as plan. I was on pace for the 13.1 miles. As time past, I was feeling the heat. Things were not feeling right. Mile 13 I was feeling some pull in my quads due to the down hill and slight up-hills. By the time mile 17 hit my right quad was done. Pretty sure it was pulled or strained. The downhills killed me. I wanted to give up so badly. I needed something to help me pull through… then I thought about a few things. “What would you tell your athletes if they felt like giving up?– YOU GOT THIS, BELIEVE IN YOURSELF, YOU WORKED TOO HARD TO QUIT!” and also, “Hello?! You have an amazing man waiting for you at mile 19-20 (heartbreak hill).”

At this point, I was let go. I was high-fiving everyone, eating popsicles, and gummy bears. I was enjoying myself. I was enjoying myself so much that once I started running up heartbreak hill, I had no idea that I was on heartbreak! Then I see Ethan, my gosh I felt like my world turned upside down. I was so happy to see this amazing man. He gave me a little kiss and told me, “You can do it!!! I love you!!” Maybe those were not his exact words but I remember what I want to remember! Haha.

I said, “I will see you at the finish!” and I was off. Making my way up heartbreak. The students at Boston College were cray but so awesome! Though I wanted to gag because off all the beer they were drinking, it was awesome!

I made it down heartbreak and it was on like donkey Kong. I pushed and I cried but I enjoyed every second. As I got closer, I saw the “Boston Strong” along the freeway and for whatever reason, I felt like a bad ass.

Then I saw the Citgo sign… tearing up because I knew I just had a right turn on Hereford and that final left turn on Boylston.

There were so many spectators cheering, my heart was so full! I see the left turn on Boylston, make the left turn on Boylston. I did it, well not quite! I was 0.2 miles away from being a Boston Marathon Finisher! Filled with so much joy and emotions, I crossed that finish line. I did not care about my time, I did not once think about my pulled quad, I just thought, “I JUST EFFING DID THIS!! WHERE THE HELL IS MY UNICORN?!?!” This is a marathon that many people dream of. I was one of 30,000 people who got accepted and FINISHED THE BOSTON FREAKING MARATHON!

After soaking it in, taking photos, getting the free goodie bags, it was time to find my man! At this point, I thought I was going to pass out, finding him immediately was necessary. I wanted to ask for a wheelchair but yeah, no. I greet him with a big hug and just break down. There were tears of joy, happiness, and pain. Lets just say, I was an emotional wreck.

Some time passed and it was time to change into my JACKET, walk it off,  and grab some food. We made it back to the apartment and I forgot that I had to hike up like 10 flights of stairs… Imagine tha

t after a marathon. Ethan went out for the pizza while I tried to regain some energy. We grubbed and went out for a celebratory dinner then headed back for more cannoli’s.

I did not wake up feeling like P. Diddy… but I was reminded that I completed the Boston Marathon and felt like the queen herself, Beyonce of course. I attempted a mile run to keep my streak alive. Day 912 of my running streak! Hehe. We then grabbed a bite and some coffee (of course). We hit up Mike’s Pastry one last time then headed to the Old North Church. There is much history in the North End of Boston. Checked out, then hit the airport!

This journey has been spectacular. I have achieved things that I would have never imagined. Competing the Boston Marathon means so much more than just completing the Boston Marathon (if that makes sense). I got to see a different side of running. All of the emotion, dedication, passion, and hard work that gets put in from not just runners but the Boston Marathons Association, Volunteers, and Spectators! This sport is incredible and I am proud to be a part of it!

Lastly, my running streak of 912 Days has come to an end. I am so proud of what I have accomplished in running so far! I would not be where I am out today with my 9run6 running family– so thank you all for your endless love, encouragement, positivity, and enthusiasm!